The Hormones of Labour and Birth: Friend or Foe?

The Hormones of Labour & Birth: Friend or Foe? 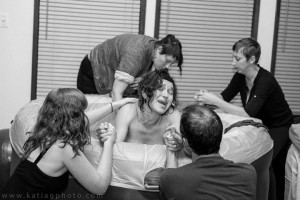 Mother nature is kind. She has gifted the birthing woman with everything her body needs to give birth; a cocktail of hormones ready to serve and guide the labouring Mother’s body every step of the way. Although during labour and birth many hormones are involved, three of these hormones have a key role to play. These hormones are oxytocin, the hormone of love; endorphins, the natural pain and stress reliever; adrenaline, the famous flight or flight hormone. The important thing to recognise about these hormones is that a pregnant woman’s state of mind and the environment in which she births, can dramatically influence these hormones in labour and therefore the course of her labour. To understand this is a gift, as it means the labouring woman and her birth partner can make sure that the hormones of labour and birth became their friend, and not their foe.

“..the balanced secretion of hormones is a delicate matter, highly responsive to external conditions and psychological states”

To elaborate on this, the labouring woman’s body, left undisturbed in labour, will produce a divine cocktail of the aforementioned hormones that work harmoniously together to facilitate a spontaneous, safe, natural and potentially transcendent labour and birth. Quite sensibly however, this cocktail of hormones can do quite the opposite if the labouring woman’s body is disturbed or under sustained stress in labour.

First, let us look at the hormone oxytocin. We still do not know exactly what happens for a woman to go into labour: it is likely to be a combination of the baby’s stage of maturity and the physical and emotional state of the mother’s health. We do know however that in the last trimester of pregnancy oxytocin is on a dramatic rise within the woman’s body. At this time, on being alerted to its presence, the pregnant uterus is very sensitive to this hormone and responds by producing uterine contractions powerful enough to expel the fetus (Stables, 2004). As each contraction occurs, the subsequent pain signals the brain to release more oxytocin, which then increases the contractions. The release of oxytocin and the rhythmic contractions of labour facilitate cervical dilatation, delivery of the baby and expulsion of the placenta.

Levine (2012) names oxytocin the ‘cuddle hormone’ as not only do we get a boost in our brain during orgasm, but even when we cuddle; it creates nurturing and loving feelings. Oxytocin is a hormone that is made by the hypothalamus, stored in the posterior pituitary gland from where it is released into the bloodstream in pulses approximately every 3-5 minutes during labour causing the uterus to contract. Finally, oxytocin plays several important roles after birth. High levels of oxytocin produced as the baby stimulates the mother’s breast help keep the uterus contracted and prevent postpartum hemorrhage. Oxytocin mediates the “milk ejection reflex” which allows for successful breastfeeding. And, as the hormone of love, oxytocin promotes the development of a strong bond between mother and baby.

Thankfully a team of hormones supports labour and birth and oxytocin does not work alone. As its levels increase throughout un-medicated labours, causing powerful & intense contractions, it is reassuring therefore to know that the resulting pain of these contractions in turn triggers the steady release of endorphins.

We have all heard someone say they are addicted to going to the gym; that’s endorphins at play, which induce feelings of pleasure, fulfilment, wellbeing and desire to repeat the experience that triggered it. Endorphins are naturally occurring opiates that have similar properties and effect to pethidine, morphine or heroin and are shown to work on the same receptors in the brain. Produced in response to pain and stress, endorphins have calming and pain-relieving effects that suppress anxiety, increase tolerance to pain and also suppress the immune system thus preventing a pregnant mother’s immune system from acting against her baby (Laatikainen, 1991; Kresser,2014).

As labour progresses and pain intensifies, endorphin levels steadily increase in un-medicated labours and reach levels similar to those found in endurance athletes during maximal exercise on a treadmill (Goland et al, 1988). In such labours the high levels of this morphine-like substance help labouring woman to transmute pain and enter the altered state of consciousness that is needed to birth her baby. In this state the rational part of the brain, the neo cortex is switched off, giving rise to the functioning parts of the cerebellum and the autonomic nervous system. This shift in consciousness delivers a more instinctive mindset, which facilitates her ability to cope with the process of labour & birth (Schmid, 2011).

Endorphins kindly keep working after the baby has been born, reinforcing the mother-infant bond and contributing to ecstatic feelings for both. In fact, mothers release endorphins whilst breastfeeding and they are found to be present in breast milk, explaining the natural high that babies often get after breastfeeding (Buckley, 2014). This is Mother Nature’s way of guaranteeing optimal nutrition for her young.

To understand how a labouring women and her birth attendants can foster the wonderful relationship between these hormones to facilitate a manageable and efficient labour and birth, it is important to understand the stress hormone adrenaline that could hinder such a labour.In nature, when a labouring mammal feels threatened or disturbed, the stress hormone adrenaline shuts down labour. To illustrate this, imagine a hungry lion mid labour approached a labouring giraffe. It would be quite sensible at this point for adrenaline to helpfully shut down all contractions, until the labouring giraffe had found a safe place for her young to be born (England & Horowitz, 2011).

No mother, giraffe or human can labour and birth if she feels unsafe or senses danger and this is rudimental learning if we want to understand how to birth naturally and safely.Dr SJ. Buckley (Pain in labour) remarks that:

Our mammalian bodies are designed to give birth in the wild, where it is an advantage to postpone labour when there is danger, and to seek safety.

Odent (1994) observes that the body releases adrenaline in response to stresses such as fright, anxiety, hunger, cold and excitement. So when a laboring woman does not feel safe or protected or when she is very frightened of pain, of the hospital or the horror stories she has heard about labour and birth for example, adrenaline levels rise and labour slows down or stops. In the same way adrenaline can inhibit all acts involved with oxytocin such as breastfeeding and intense moments of sexuality it can also inhibit labour contractions or intensify their pain. In early labour this has the potential to stop labour.

Fear activates the nervous system to produce adrenalin that fuels the ‘fight or flight’ response. This response was designed by nature as a short acting protective mechanism with the objective of safety. We run into problems when a prolonged ‘fight or flight’ response in labour occurs. Sadly this is often the case for many human mammals who often birth in a culture of fear driven by horror stories about birth from friends, family and the media and who mostly birth in unfamiliar, brightly lit clinical surroundings, observed by strangers and protocols.

Increased levels of adrenaline neutralise the effect of oxytocin resulting in contractions that can become very strong and difficult to handle or, more typically they become weaker. In both instances, the contractions become ineffective causing a slowing or lengthening of labour, an increase in pain due to a subsequent decrease in endorphins and therefore exhaustion, panic and more fear in the labouring mother. This response increases heart and respiratory rate and shunts blood away from major organs (including the uterus) to the large muscles with the objective of ‘fight or flight’. This reduction in blood flow to uterus and placenta, causes a reduction in blood flow to the baby causing adverse fetal heart rates. In addition, once the baby is born, low oxytocin levels mean there is an increase risk of postpartum hemorrhage or retained placenta due to inefficient or absent contractions. These consequences, all caused by a release of adrenaline can understandably result in an increase in medical intervention such as assisted vaginal deliveries and Caesarian section. Grantly Dick-Read (1959) believes that fear in childbirth: “is directly responsible for many of the unpredictable complications of otherwise normal labour.”

Adrenaline however is not always a foe in labour. When birth is very close, a surge of adrenaline takes place and now, the result is quite different. A fetal-ejection reflex appears to occur. In the wild, when birth is very close, getting the baby animal out quickly allows the mother to move to safety (Lothian, 2004). There may be a rise in adrenaline to provide the energy needed for pushing in the second stage.However, Michel Odent (1991) describes the fetal ejection reflex during the second stage of labour, and comments that if the hormone orchestration of normal labour has been altered (for example by the use of medication), the fetal-ejection reflex does not occur. On an intellectual level, a woman may believe that the hospital is a safe, protected environment, but her body reacts quite differently in the typical unfamiliar hospital environment, where women are disturbed at every turn—with machines, intrusions, strangers, and a pervasive lack of privacy. Additionally, at birth, high adrenaline levels allow the baby to be wide-eyed and alert when meeting the mother for the first time and helping in the initiation of breastfeeding (Childbirth Graphics, 2012).

In his book Birth Reborn, the French obstetrician and author Michel Odent reports seeing women labour in a ‘virtually ecstatic state’ but states that:

“in order for the body’s natural powers to come into play, they must be left alone.” He adds that it is common practise to give women painkilling drugs (artificial endorphins) and synthetic hormones (artificial oxytocin) during birth, however this destroys the hormonal balance on which spontaneous labour depends. Medical interventions, such as induction and augmentation of labour and the use of pain medications, can interfere with the natural and sensitive hormonal processes of giving birth. These procedures can sometimes lead to a cascade of interventions that can result in a Ceasarean birth. By understanding the hormones of labour and birth, a woman and her birth partner can work with her healthcare professional to make informed decisions that best fit her situation and childbirth preferences.

Two factors that disturb birth in all mammals are firstly being in an unfamiliar place and secondly the presence of an observer. Feelings of safety and privacy thus seem to be fundamental. Leap and Anderson (2004) illustrate well how safely and naturally babies can be born given the correct environment:

“… you will only have seen this astonishing sight if you understand that if you disturb her in her work, she will be thrown off course. Like a zoologist, you must first learn how to behave, how to sit quietly and patiently, almost invisible, breathing with her, not disturbing her almighty internal rhythm. And you will see that the pain of her labour seldom overwhelms her. Nature would not have organized labour to become intolerable.”

To conclude, it becomes obvious that the hormonal physiology of labour and birth are best served when a woman feels calm and relaxed in a trusted environment, surrounded by trusted people. To nurture such an environment for the birthing mother, we must challenge the culture of fear that currently pervades childbirth and replace it with faith and admiration in the miracle and simplicity of labour and birth.

Amir Levine (Attached: The New Science of Adult Attachment and How It Can Help You Find and Keep Love)

Buckly, B. Pain in labour – your hormones are your helpers. Retrieved May 25, 2014,  https://www.birthinternational.com/articles/birth/16-pain-in-labour Childbirth Graphics, Hormones of Labor and Birth, Retrieved 31 May, 2012,http://www.childbirthgraphics.com/index.php/articles/hormones-of-labor-and-birth/

Mitchell, M (1981) The Relation between the release of Prostagandin at amniotomy and the subsequent onset of labour, Nuffield Department of Obstetrics and Gynaecology, University of Oxford, John Radcliffe Hospital, Headington, Oxford