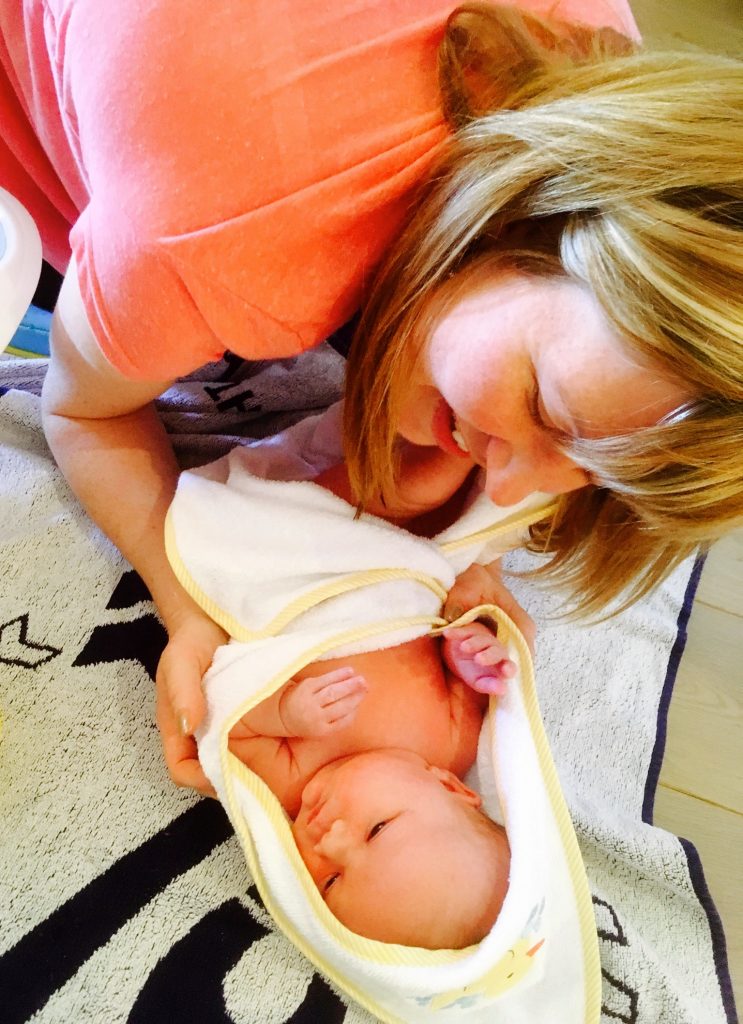 Thank you do much for all your help and advice. I am so ecstatic to send you the text you told me I would be sending:  ‘Natal Hypnotherapy actually works!‘I am delighted to tell you of the fashionably late arrival of our girl (you were right about that too!) Arabella Grace Campbell at 2.08am on 7 May 2016. She tipped the scales at 9lbs 6 1/2 oz (!) and immediately made a  mockery of the old adage ‘big girls don’t cry’! She’s settled down now though and is sleeping peacefully. My waters broke at around 2am on 6th May. I had a 100% positive birth experience and in fact enjoyed it!! I laboured for 24 hours from waters breaking/contractions beginning and went to the birth centre at 4-5cm dilated. I had a great experience there until Lady ‘A’ poo’d and so had to be transferred to labour ward.

‘I am so ecstatic to send you the text you told me I would be sending: ‘Natal Hypnotherapy actually works!’

I had a great experience in the labour ward, became fully dilated pretty quickly and pushed for an hour. The Natal Hypnotherapy worked from the contractions beginning at home right until the end. I went completely into my own body and didn’t need to listen to any tracks/do anything other than relax and breathe. In fact it was made worse any time Martin suggested taking me off course i.e. watch films/listen to music/send texts etc. It was just like my body knew what to do and I kept hearing your/ Maggie’s Howells voice over the course constantly. Ultimately Lady ‘A’ didn’t/wouldn’t turn-she was the wrong position- sort of squint/ back to back I think – and was stuck (which I could pretty much feel- I am sure I would have got her out otherwise) So, I ended up with a spinal and rotational forceps delivery!! The doctors and nurses in the theatre were wonderful but the pain now postnatally is the worst part by far. Thank you so much again for your support to Martin and me over the last few weeks- we both really appreciate it xx

I want to add my thanks to those already given by Jenny in the invaluable and immeasurably part Natal Hypnotherapy played in making our daughter Arabella’s arrival into this world such a positive and fulfilling experience for all concerned.

I know that Jenny has already given you a summary of her birthing experience, but I thought it would be worthwhile also giving thepartner/cheer-leader/gate-keeper’s perspective of the labour and how the hypnotherapy worked so incredibly well in practice. I will try and keep it short rather than giving a ‘blow by blow’ (or indeed ‘push by push’) account!

As you were well aware Jenny had almost an innate fear of labour (originating from severe period pains from her teens onwards) combined with a degree of self-doubt (very much mis-placed!). Jenny and I had found the hypnotherapy course very beneficial and Jenny had listened to the hypnosis tracks on a daily basis. I was completely on-board with the underlying philosophy and the key principles of breathing, relaxing and focusing in order to achieve your goals (whether it be work, sport, birth, etc..).

Jenny remained cool, calm and collected throughout the whole nearly 24 hour experience (as did Arabella based on her heart rate!). This was despite the following “speed-bumps” which could have sloweddown the natural progression of

None of these potential adrenaline hits seemed to have an adverse impact on the timing of Jenny’s contractions or the natural progression of the birth. Jenny remained “in the zone” throughout the whole experience and only took gas/air up to the point that an epidural became the only viable option. The mid-wives and doctors were all very surprised/impressed that Jenny had progressed so far with basically breathing alone – hats off to the benefits of oxytocin and endorphins!

‘A huge thanks again from a very proud husband/father for making this such a rewarding and positive experience and memory that will last with us for a lifetime.’

All the staff at the Royal were first class andI think really assisted in providing a reassuring, safe and protectedenvironment during the birth. The midwife’s did their best, even when taken outof the birthing centre, to try

and put into practice Jenny’s birth preferences. The scene that met me when I arrived in the operating theatre will remain withme a long time – Jenny sitting on the operating table having a chat and a laughwith the members of the medical team as if she was socialising over a glass of wine!

The little part I played in the proceedings simply involved me remaining positive and to keep other people’s potential negative comments (e.g. are you finding it really hard?! Are you tired!? I know its difficult/sore?! Are things not proceeding well!?!) at bay, providing reassurance as and when required, trying to keep Jenny as hydrated as possible and to mop her brow with ice water with my special Boots ‘magic’ sponge (and to eat any food ‘in secret’ in the toilet!). My recollection was that Jenny’s only real dip came having just been given the positive news in the labour ward that she was now 8cm dilated.

Jenny at this point said that she was really tired and thought that an epidural would be required – Jenny has since clarified that she took this as being “only 8cm” and had hope to hear that she was fully dilated at that point! This was very much Jenny’s marathon mile 17! Thankfully both the midwife and myself were on the same wavelength and some quick reassurance/distraction put Jenny straight back on track.

Anyway, a huge thanks again from a very proud husband/father for making this such a rewarding and positive experience and memory that will last with us for a lifetime.